As President Obama comes to his final year in office, reporters and others are
interested in how he might spend his time in those months.(1) Looking at the patterns of his
predecessors, we can see the interest two-term presidents have had in travel, especially
when they experienced losses in the congressional elections occurring in their sixth year.
The following is an excerpt about presidential travel at the end of an administration from
my recently published book, Before the Oath: How George W. Bush and Barack Obama
Managed a Transfer of Power.(2)

With few initiatives to put forward and with attention drawn to his potential successors, we see the degree to which the president is gradually less of a presence in public life in terms of his public appearances, including his remarks, press conferences,and events where he responds to reporters’ queries. During the last six months of his presidency and sometimes even a year before his departure, a president is seen and heard less than was the case in his earlier years. He is less relevant to the news organizations, people in the Washington community, and his party, especially when the results of the last off-presidential year congressional elections before he leaves office bring in a wave of elected officials from the opposing party. Except where foreign and national security policy is concerned, he winds down the number of remarks he gives as well as the number of times he speaks with reporters. What he does ramp up, however, is presidential travel, especially if his party lost a large number of seats in one or both houses of Congress. Party Control in Final Off-Year Congressional Election for a Two-Term President* 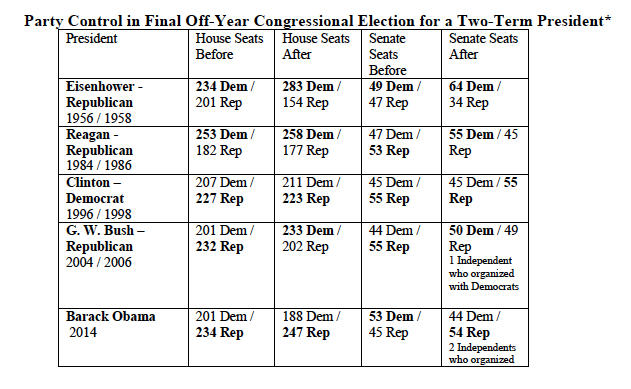 * Harold W. Stanley and Richard G. Niemi, “Table 1-10 House and Senate Election Results, by Congress,1788-2004,” Vital Statistics on American Politics, 2013-2014, Sage / CQ Press, Washington, DC, 30-31. Note: After 2006 and into 2015, two Senate Independents caucused with the Democrats.
President Eisenhower faced such a loss in 1958 when Republicans lost fortyseven
seats in the House and thirteen in the Senate and so too did Lyndon Johnson when Democrats lost forty-seven House seats and four seats in the Senate. In the congressional elections in 1986 during the Reagan years, Republicans lost control of the Senate when they lost eight seats though they only lost five seats in the House. President Clinton was in a different position as Democrats neither lost nor gained Senate seats in the 1998 election and gained four in the House. For President George W. Bush, the pattern was a repeat of earlier eras in which the incumbent saw his party lose a substantial number of House seats, enough for a shift in control to the Democrats. Republicans lost thirty House seats, while the Democrats took control of the Senate with a gain of six seats, bringing the Democrats to a 49-49 split with two candidates who ran as independents, Joseph Lieberman and Bernie Sanders, promising to caucus with the Democrats.

The template of a president as a world traveler in his final year starts with President Eisenhower, the first president to finish his second term in office with the knowledge that he was not permitted to run for a third term. During his eight years, President Eisenhower entered a foreign country thirty-seven times (some countries are counted multiple times; France, for instance, is counted four times).(4) When the visits are broken down by yet, twenty-eight of President Eisenhower’s thirty-six visits (77.8 %) took place between February 1959 and October 1960. Once the 1958 congressional elections results were in and Democrats captured control of the House and retained the Senate, President Eisenhower adopted a lower profile because he knew his legislative agenda would meet a hostile Congress.
The speeches he gave during this period reflected his trips abroad and his foreign
policy and national security goals for the United States. Lyndon Johnson took to foreign
travel as well visiting twenty-seven countries in his five and a quarter years, with 17 of
those (63.0 %) in his last year and a half. Presidents Clinton and George W. Bush were
the biggest travelers of them all but still fit into the pattern of loading a large amount of
their foreign travel into their final months. President Clinton had 133 country visits with
fifty-one of them (38.3 %) in the period following the 1998 congressional elections.
President George W. Bush’s travels closely mirror those of President Clinton with 140
country visits and fifty-four (38.6 %) in the almost two years following the off-year
congressional election.5 Reagan represents a departure fro the pattern, with forty-nine
country visits in his eight-year presidency, but only eleven (22.5 %) occurred in his last
year and a half.