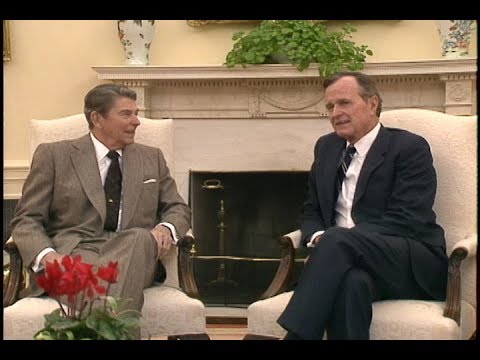 “And then the president-elect realizes: I’m going to be taking an oath right from the Constitution and it says, preserve, protect, and defend…. But, the president cannot keep that oath without other people keeping their oaths. And those people who took the oath to follow are very young. Some of them too young to vote. Others of them may not have voted for you. But they’ll all keep their oaths, giving up life, limb all because the president said, ‘I need help keeping my oath.’ And that becomes the greatest presidential burden that is carried. And you realize that the night before you take the oath.”
–former Chief of Staff Andrew Card, Jr., describing pre-inauguration briefings

“There’s nothing that can completely prepare you for the job of being President… You know, that first day after…they walk you into the Oval Office, then everybody leaves, and you’re thinking, ‘Oh man, now what?!’
— President Barack Obama, 2016

A letter to the White House Transition Project:
“You were a big help to the Transition Coordinating Council and the overall transition effort both in 2001 and 2008. Thank you for taking the time to share your expertise.”
–- President George W. Bush, 2010

Since 1997, the White House Transition Project has provided non-partisan expertise in all phases of democratic transitions, from constitution-building in emerging democracies to regularized, statute driven transfers of power. This page previews those services, beginning with highlighted essays or reports of special interest. 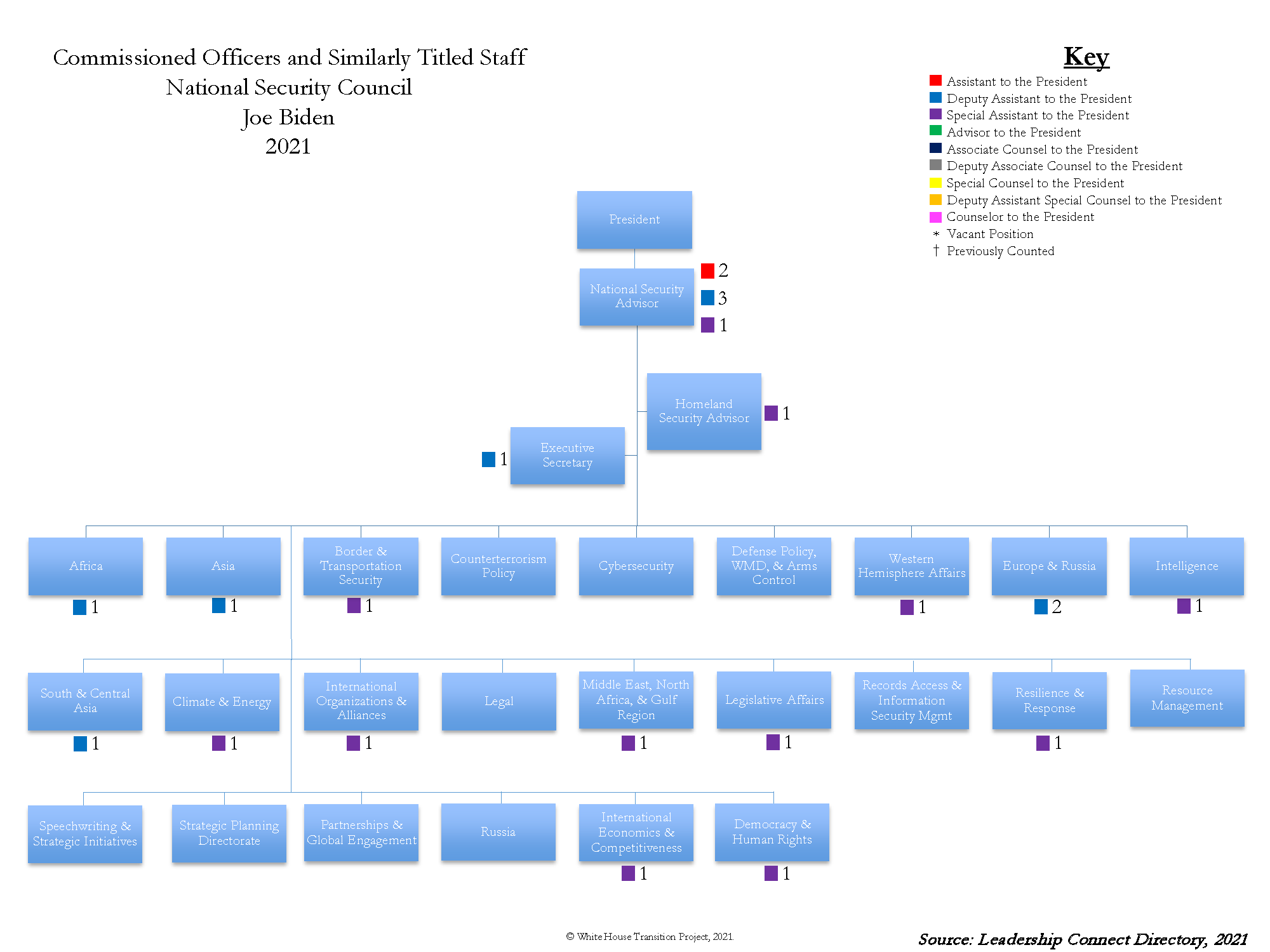 The White House Transition Project releases its newest organization chart (a part of its long standing program detailing White House staffing patterns). This is a three page chart covering the White House Office, the Vice President’s Office, the First Lady’s Office, and the NSC. Headline: The Biden White House organization returns to the “normal” structure of White Houses that work. See comparisons with previous administrations by downloading our study here.

Reports on the “Stand Up”

This report summarizes five measures of the Biden Administration’s progress in standing up the American Executive. It covers filling the government’s “stand-up critical” positions, the general pace of nominations and confirmations, a recurring monitor on gender, and a summary of the backlog of nominations and confirmations. For additional details, see our web page on appointments. 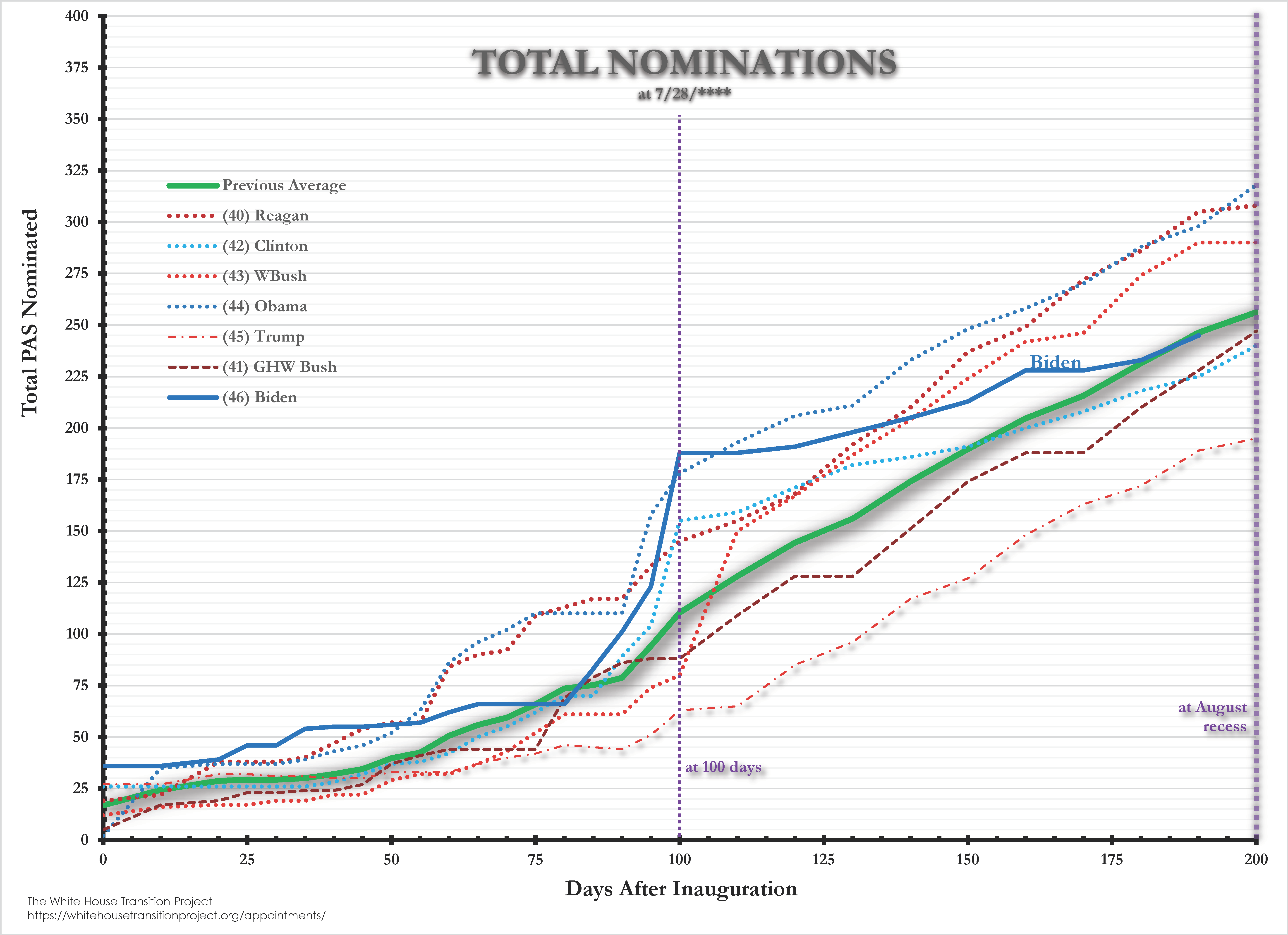 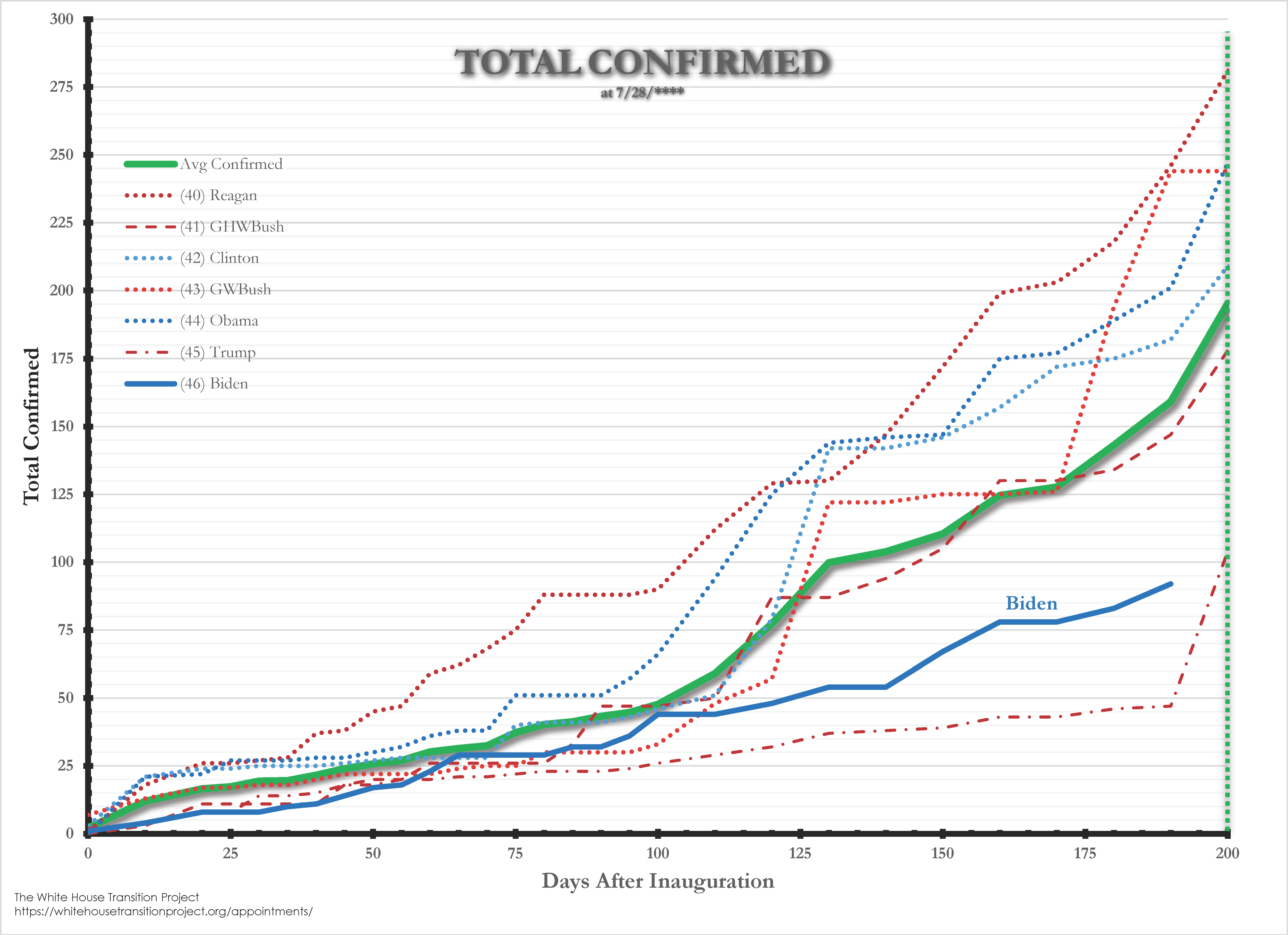 Confirmations Next – The Senate still lags on confirmations.
Since the beginning of the modern appointments system (beginning with President Reagan’s tenure), few Senate majorities have had a slower stand-up process. The lack of Senate work on Biden nominations has led inevitably to a below average number of confirmations, holding up the government. The general standup now also has a large backlog to work on (see the backlog). Biden’s remains the second worst stand up in modern history. 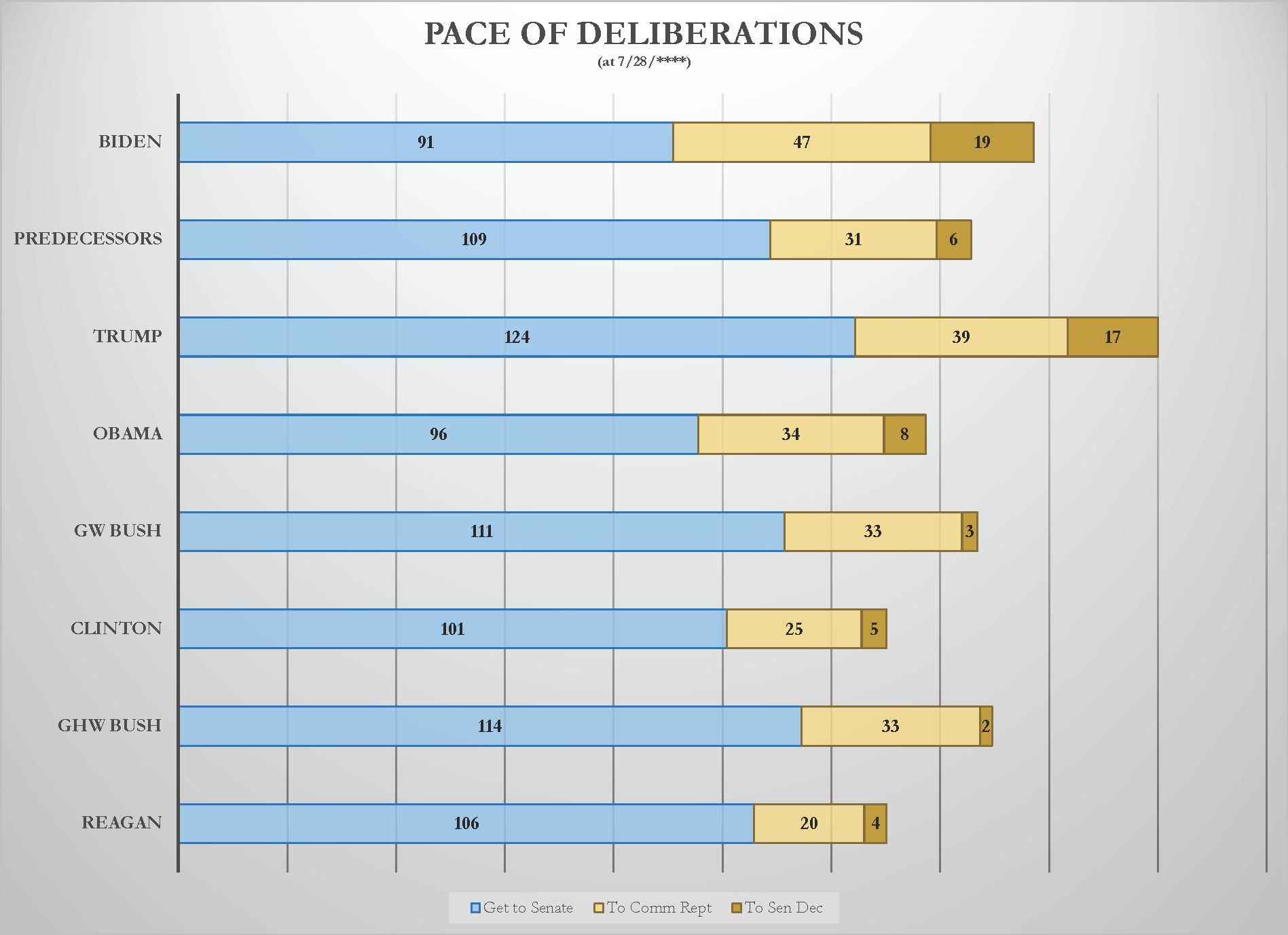 The Pace of Deliberations – The Senate deliberations record-setting.
Like all previous administrations, the greatest proportion of the time associated with getting a government position filled occurs in the Executive. While the Biden White House remains below the average, taking less time to nominate positions (91 days) than the average for the past six presidencies (109 days), the pace of Senate deliberations has set records, in an exceptionally bad way. The current Senate majority is taking even longer (66 days) than the Trump/McConnell Senate majority did (56). For Biden, the Senate floor deliberations (at 19 days) have taken more than three times the average time for the past six presidencies (at 6 days).  The pattern for committee deliberations, however, normally less partisan, have lengthened (now at 47 days) remains more than 50% longer than the average for previous Senates (31 days). 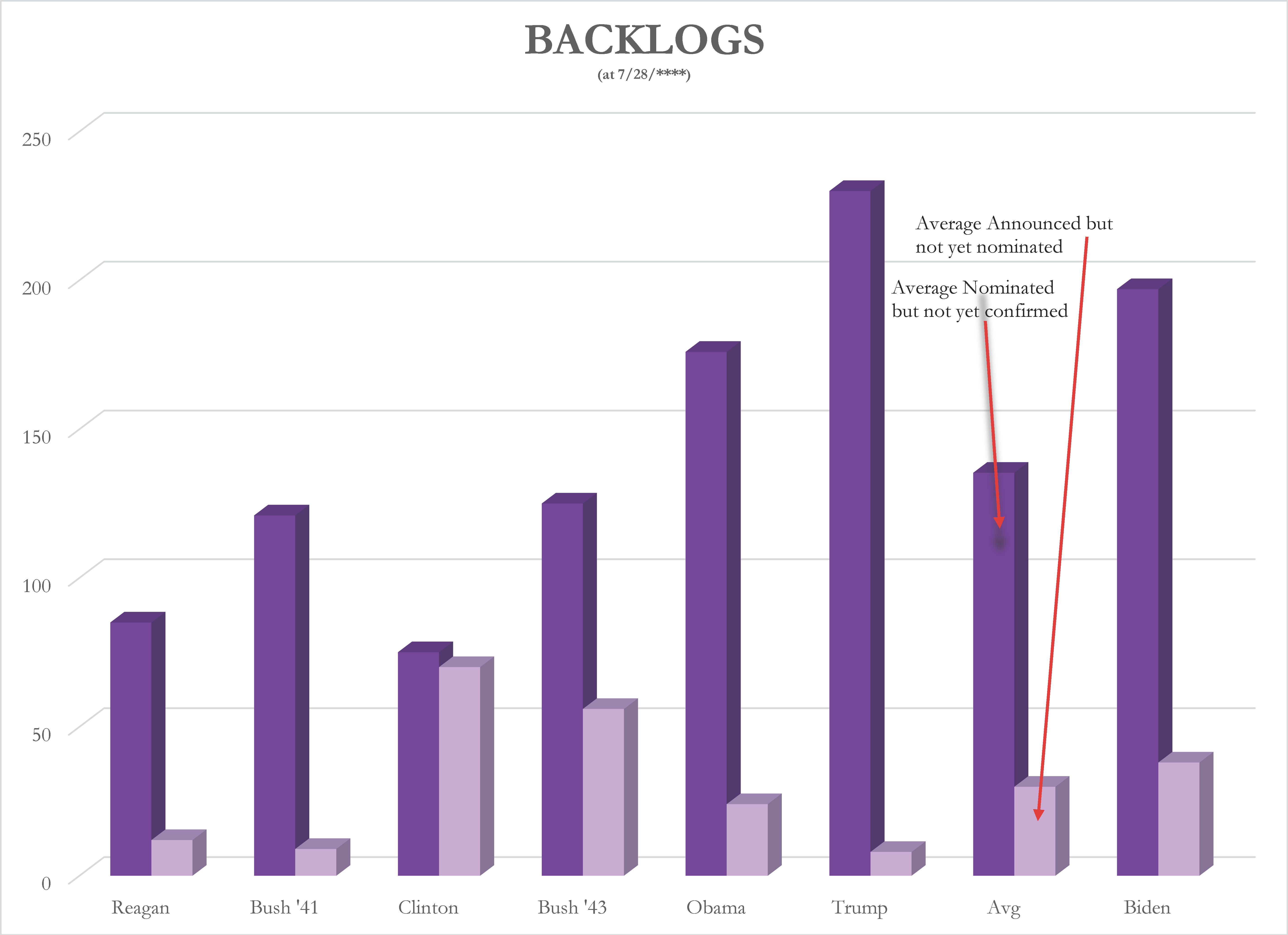 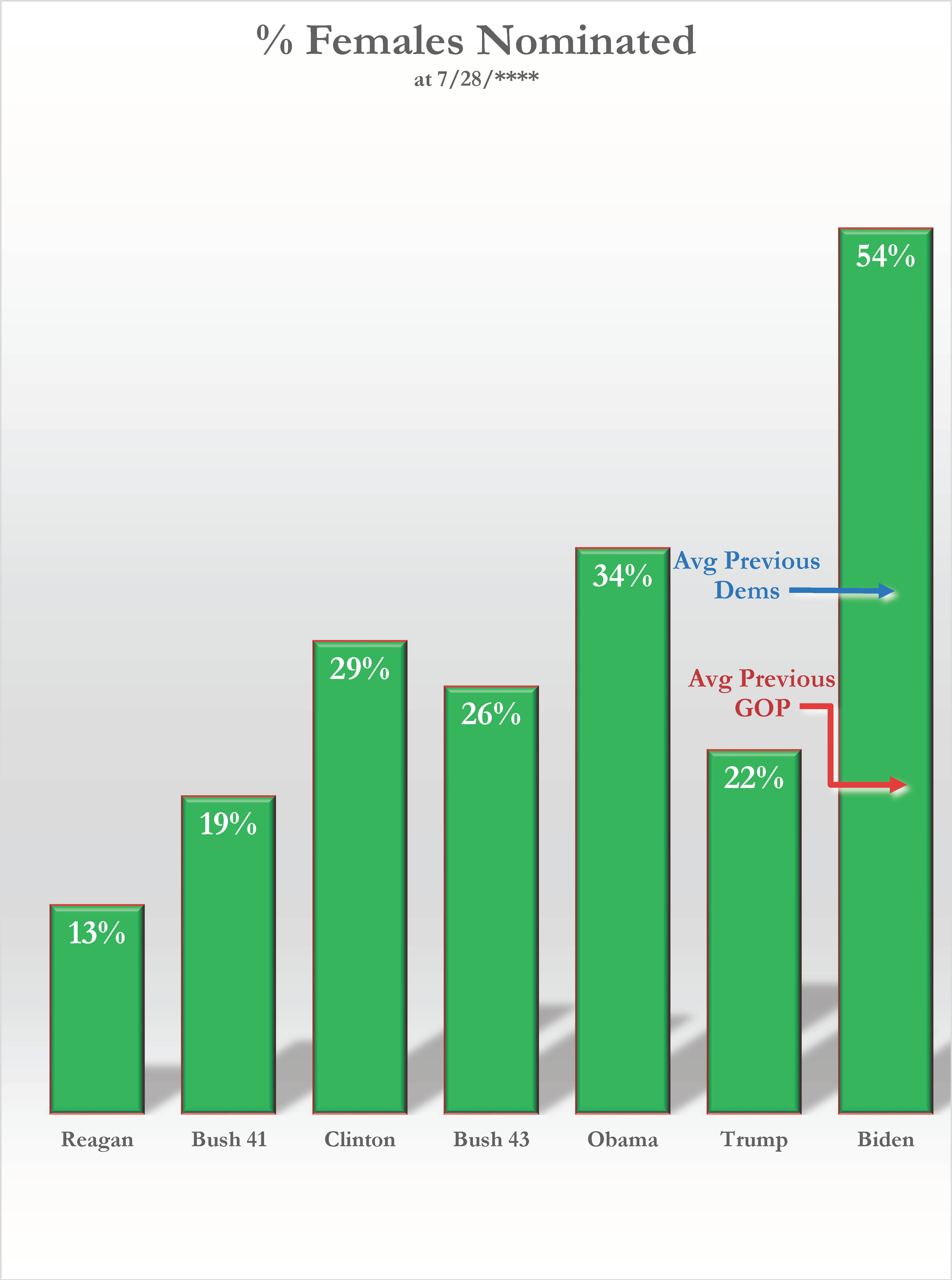 The Gender Rate – Still the Bright Spot.
On gender, the Biden record continues to double the average of his predecessors; the new administration almost doubles the rate of even the average for Democratic predecessors. The administration’s nominees almost triple the gender rate for GOP predecessors. While the cabinet is more diverse than any other, the new administration’s commitment to gender representation throughout the government stands out as an especially significant pattern. New numbers on White House staffing also suggest this same pattern on gender.

Details of a Peaceful Transition 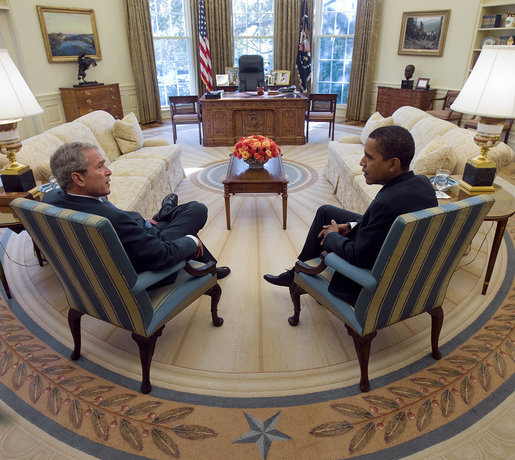 Congressional Testimony on Presidential Transitions
Since 1964, Congress and the President recognized then and continue to acknowledge the importance of an effective transition to a good start for a new President and his team. Having a well-organized operation developed early in the election year benefits a President. Organizing early with an experienced and knowledgeable staff, an incoming President can seize the political momentum and establish his brand of leadership at a time when the public is paying attention. See the complete testimony of WHTP Director Martha Joynt Kumar by clicking here. To view the actual testimony and committee hearing, click here.

Presidential Activities During the 100 Days 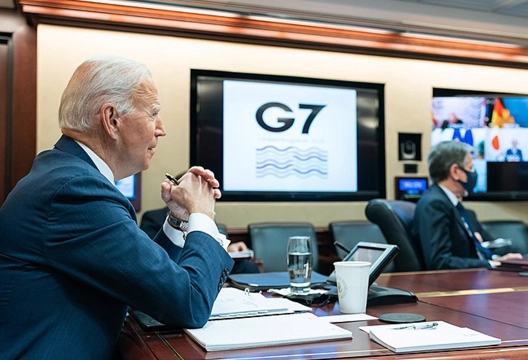 On day 1, new presidents step onto the thin ice of history, alone. What do they do all day, who do they see, and what choices affect both? A new report from WHTP answers these questions. It summarizes the distribution of time dedicated to responsibilities, what do presidents trade-off to increase their engagement in communications, and with lots of “senior advisors” who gets cut out of the room. For a copy, click here.

The Potential For Presidential Leadership
The challenge of a new transition inevitably involves how to lead. Now, more than ever, a new president will face that challenge. In an essay on how opportunity and persuasion shape the potential for leadership, renown presidential scholar George Edwards suggests “Staying private is likely to contribute to reducing gridlock, incivility, and public cynicism and deserves a more prominent role in the president’s strategic arsenal.” For a copy, click here.

See all of our briefs here.

The joint product of 21 former senior OMB leaders, the WHTP briefing book on OMB offers a unique view on this critical executive agency and what it takes to run it. Many agree that the requirements for leadership at OMB are far different than what many in Washington expect — having experience in the congressional budget process, for example, is widely agreed upon as not one of them. Not unexpectedly, many in Washington simply don’t understand what it takes to lead at OMB and carry through on the President’s mission. To get your own copy of the guide, click here.

The Chief of Staff, in Brief

This synopsis summarizes the WHTP briefing book on the White House Chief of Staff, click here.

Office of the Chief of Staff, in full

In the end, every chief of staff is a servant of the president, and the more independence they ask for or try to carve out for themselves, the more likely they are to fail.
It once was possible to argue that the White House could be run without a chief of staff. Those days are gone. The complexity of the modern White House requires discipline and coordination that can only be achieved if there is a central coordinating point, someone other than the president to oversee the operation. If independence and authority are both the necessity of a White House and a recipe for failure, then how do White House Chiefs of Staff proceed. This new brief brings the wisdom of experience to bear on this question from the advice of those who have borne the responsibility. Click here for a copy.

Office of the Vice President

Once the epitome of a spare part, the Vice Presidency has become a central element of every administration’s successes or failures.
“Two brothers went off to make their fortunes. One went to sea and the other became Vice President. Neither was ever heard from again.” No other job in the American constitutional system has seen a greater transformation than the Office of the Vice President. This new briefing book on the vice-president outlines the dimensions of that change and how to manage the opportunities and responsibilities of this newly defined position in the White House.

See all of briefs here.

The New Government Stands Up

Using the Senate’s “Nuclear Option” slowed confirmations, …again
A new WHTP study analyzes deployments of the “nuclear option” to limit the filibuster, along with other Senate changes affecting deliberations on nominations (including limits on “blue slips”). Senate leaders of both parties intended these changes to promote faster consideration of the president’s judicial nominees. That hasn’t happen. Here’s why, what did happen, and how to strengthen the appointments process before the next time. The highlighted changes would actually reduce partisanship.

WHTP’s Research Summary on Appointment Politics outlines in memo form what research tells us about how to get ready for and then improve the appointments process, including how to limit the impact of growing partisanship.

Presidents and the Press 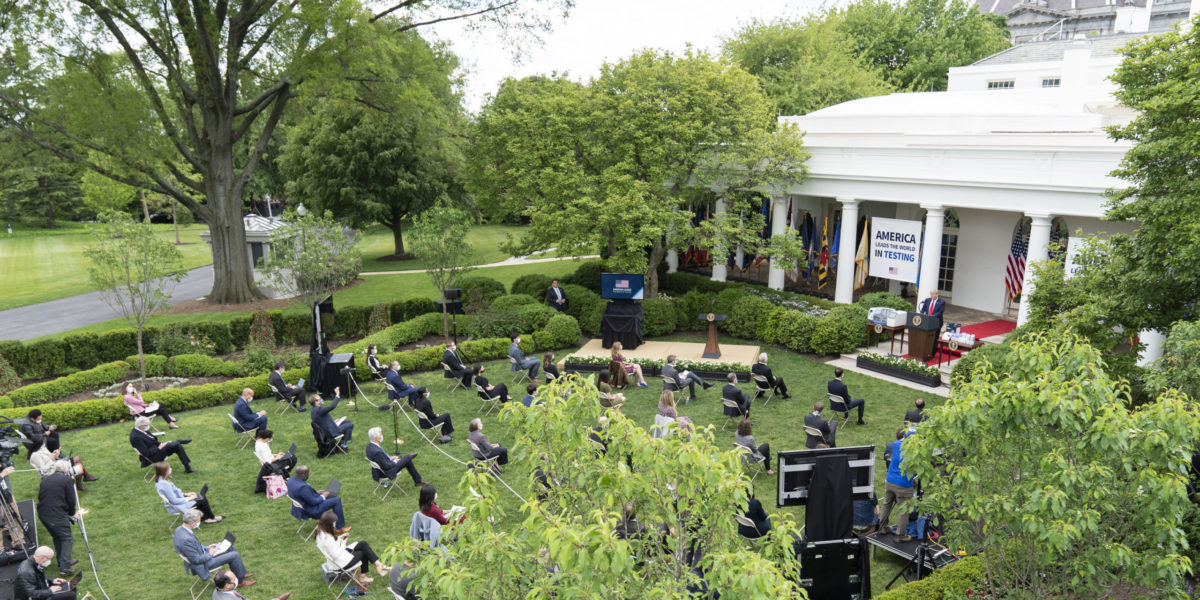 Trump in Comparative Perspective
Using her unique data on press interactions, WHTP’s Martha Joynt Kumar compares President Donald Trump to his five predecessors showing how each used the communications strategies that brought them to the presidency. In that way, President Trump mirrors his predecessors. But in other ways, those five predecessors had more in common with each other than with President Trump. See this analysis by clicking here.

Since 1997, the White House Transition Project has interviewed a wide range of Assistants to the President about the best ways to carry out the president’s transition to governing and manage their responsibilities in governing. WHTP scholars who specialize in the various operations of a White House, use these interviews to provide a guide for the new presidential team.

In addition to these basic resources for US Presidential Transitions, WHTP maintains a collection of its basic interview, through our long-standing partner, the US National Archives. For a sample of these interviews currently in the public domain go here.

To adjust critical attitudes about presidential transitions, WHTP maintains a collection essays on how transitions work and how others have learned the lessons about how to prepare. See the drop down menu under the banner for general essays on transitions.

In one of our periodic reviews, Martha Joynt Kumar reviews presidential interchanges with the press over the last six presidencies and as of 30 months into their administrations. Read the report: Six Presidents Interchange’s with Reporters at 30 Months – Kumar. Some of the highlights:

The use of time represents the president’s most valuable asset. A commitment to one responsibility necessarily precludes commitment to another. And as a president faces changed circumstances, changing commitments creates trade-offs between responsibilities. Using the daily minute by minute logs of presidents, WHTP builds a picture of typical presidential commitment and trade-offs. These studies focus on two topics: the transition period through to the 100th day and crisis management. See for example, Presidential Work in the First 100 Days.

The pace of appointments in both the executive and in the Senate accounts for the ability of any administration to carry out its responsibilities to the electorate and to the nation. Appointments fulfill the president’s agenda set by the election and they also stand up the critical functions of the national government, from transportation to space to global economics and national defense.
Our personnel trackers report on deliberations across the entire appointments process:

WHTP’s Personnel Trackers follow the pace of appointments in the new administration by comparison with administration’s dating to the rise of the modern appointments system during President Reagan’s first year. The trackers cover two groups: a common set of 220 “critical” appointments and a larger, more diverse group of 980 presidential nominations.

WHTP reports these results in 10 day increments during the first two years. See our Appointments page for more detailed information.