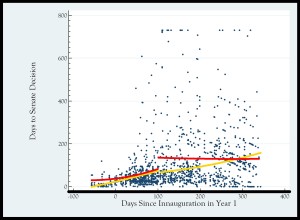 A preliminary WHTP study using WHTP’s data on presidential nominations for the last three presidencies during their first year. A preliminary analysis tracks the differences in how long it takes the Senate to reach a decision on each nominee. The study distinguishes between two groups identified by the National Commission on Reform of the Federal Appointments Process: first, nominees for “time sensitive” positions (indicated by the gold trend line) those positions include national security and other sensitive management and policy making positions in the US Executive. The second (indicated by the red trend line) shows non-time sensitive nominations.
Basic findings, illustrated in the graph above by looking at the trend lines: the longer the administration takes to nominate someone, the longer it takes the Senate to reach a decision. That result suggests that time sensitive appointments would profit from a strategy of “front loading:” issuing a considerably larger number of nominations during the first 100 days should generate a 30% improvement in Senate processing.
In addition to the efficiency improvement, this strategy suggests a reasonable first step in substituting “efficiency” for partisanship, polarization, and rancor in the appointments process — agree to increase staffing resources in both the executive and the Senate to process more early nominations. If such an agreement could improves processing of nominations in the critical early period, then this approach might also reduce the number of appointments that get entangled in current policy fights, themselves unavoidably partisan in nature.